San Francisco (SF) switched to using "bastardized-top-3-only IRV," (which I will abbreviate IRV3) instead of T2R (top-2-runoff), holding first IRV3 election in November 2004. On this page we'll try to figure out what was the result of that switch. Was it an improvement? (Probably not.)

HOW MANY VOTERS USED IRV-STYLE VOTING?

In 2007, many SF Voters did not utilize their wonderful new option to rank choices. 94% of absentee voters did not list 3 choices on their ballots in the November municipal election, even though there were 9 candidates for mayor.

WHAT WERE THE COSTS?

(More data here.) These figures on their face certainly seem to suggest IRV leads to a cost-increase, but it could be counter-argued that after the Florida 2000 election fiasco, a lot of election departments around the USA changed procedures (encouraged also by new federal laws) in ways that in some cases increased costs. A more-detailed look into their budgets might be more informative. 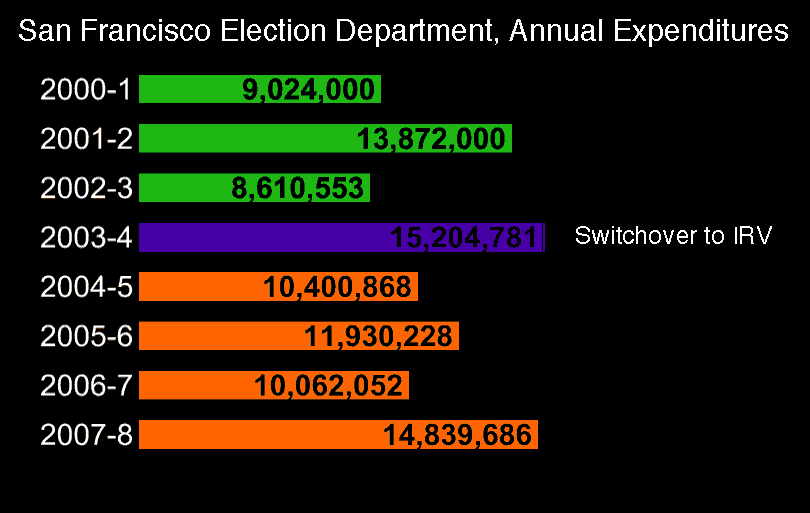 WHAT HAPPENED TO VOTER ERROR RATES?

They skyrocketed with IRV, up by about a factor of 7 in San Francisco. See /SPRates.html.

WHAT WERE THE ELECTION RESULTS IN THE INSTANT-RUNOFF (IRV) ERA?

Below is a rather tedious year-by year examination of IRV election results. You can skip to IRV summary.

So obviously the exhaustion fraction was very high and 60.1%, i.e. a large majority, of all voters were prevented from deciding (i.e. prevented from having any impact whatever on) the final choice between the two ultimate frontrunners Kelly & Cohen. This is somewhat better than plain plurality because 76.4% of the voters failed to top-rank either Kelly or Cohen and 76.4>60.1. But not a whole lot better.

Speculation: IRV3 may actually have been worse because the 39.9% of voters who got to have a say about Kelly vs Cohen, may have been a "more biased sample" of the voters, thanks to the IRV3 process which may or may not have served to amplify sample bias. (For example, if voters who favored Kelly>Cohen tended to rank several candidates ahead of Kelly, while voters who favored Cohen>Kelly tended to rank only one above Cohen, then the IRV3 process would "amplify sample bias" causing Cohen to win the final round even though a majority preferred Kelly>Cohen. I have not tried to analyse the ballots to decide whether that actually happened; I am just explaining one possible mechanism for amplification of bias by the IRV3 process.)

Indeed, in the final round, even full IRV (as opposed to IRV3) would also have had a lot of trouble because IRV is designed to work well in "2 and a half"-candidate races, not 4-candidate close races like this. Range Voting works pretty well even in "3 and a half" candidate races.

Further Speculation: This race may have suffered IRV "paradoxes." One possible paradox that might have happened is, suppose 31 Tran>Sweet>...>Cohen voters got killed before they made it to the polling place. Then Tran would have been eliminated in round 18. Perhaps a lot of Tran votes would have transferred to Sweet... enough to make her win. If so, by thus removing Cohen-bottom and Sweet-near-top voters, we would have hurt Cohen(!) and helped Sweet. This can also be viewed as a monotonicity-like failure: these 31 voters by demoting Tran & Sweet to bottom would have made Sweet win. This all currently is speculation, but the fact there were 21 candidates makes the number of possible IRV-funny-business routes enormous hence probably some of them work.

(SEE BOTTOM FOR SF CHRONICLE EDITORIAL INSPIRED BY THIS ELECTION, WHICH ITS AUTHOR, RIGHTLY OR WRONGLY, REGARDS AS A DISASTER.

LATER NOTE [January 2010]: That editorial was correct; this IRV election was a disaster. The proof is that Ed Jew is currently residing in prison for 64 month sentence after pleading guilty in 2009 to extorting $80,000 in cash from local business owners.)

19 elections looked at. IRV process actually needed (pseudo-runoff) in 11. Every IRV winner (except one, superv#10 in 2010) also was a plain-plurality winner. Due to "ballot exhaustion," no IRV winner (on occasions when the IRV process was actually needed) ever got a majority (i.e. over 50%) of the eligible ballots, in any round, except for Ting in the 2005 Assessor-Recorder race.

WHAT WERE THE ELECTION RESULTS IN THE TOP-2-RUNOFF (2-ROUND, PRE-IRV) ERA?

Below is a year-by year examination of T2R election results. You can skip to T2R summary.

19 elections looked at. 13 required runoff. Of the 13 runoffs, 5 changed, and 8 preserved, the plurality winner. Every winner had a majority of the ballots cast. The voter turnout in the runoff (2nd) round exceeded the turnout in round #1 in the mayor and DA races, but fell below it for the district supervisor races.

SAN FRANCISCO CHRONICLE EDITORIAL Sunday, 10 June 2007: Now, how did this guy get elected?

by John Diaz. This concerns the election of Ed Jew by IRV. Jew later was imprisoned for using his office to extort $80,000 in cash from local business owners (pled guilty). But Diaz wrote this before that happened.

IN RECENT years, San Francisco voters have set up systems promising to encourage the election of citizen-politicians from the neighborhoods and to raise voter participation and the prospects that our elected leaders arrive in office with a "mandate."

So, how did it come to pass that the city's newest supervisor, Ed Jew, apparently did not even live in the Sunset District and was the choice of just 5125 (or 26.2 percent) of voters? And the FBI is looking into what this "citizen politician" was doing with $40,000 in cash from tapioca-shop owners who had sought his help with city permits.

It turns out that both of the voter-installed "reforms" -- district elections, instant-runoff voting -- helped make it possible for the flower-shop operator, who once served as vice chairman of the local Republican Party, to get elected in San Francisco on a "grassroots" campaign.

District elections, reinstituted in 2000, have turned the races for San Francisco's 11 supervisorial seats into mini mob scenes to represent districts that each contain about the population of the city of San Leandro. One of the arguments against district elections is that, in running to represent these 11 territories, candidates may lose sight of their larger responsibilities as a custodian of citywide and even regional matters.

Jew certainly played to provincial concerns, such as water rates, potholes and neighborhood schools. He shook a lot of hands. He spent $80,000 of his own money, courted the Chinese-language press and let the convention wisdom anoint Doug Chan and Janyry Mak as perceived frontrunners. In what might be an unthinkable gaffe for most serious candidates, he arrived an hour late for The Chronicle's endorsement-interview session, sitting down just as the other five candidates were getting ready for closing statements. He blamed Muni.

San Francisco's system of electing supervisors did not require him to win over very many of the city's voters -- and he did not. On election day, 73.8 percent of the voters in District 4 expressed a preference for someone other than Ed Jew.

In the old days, Jew would have been forced into a runoff against Ron Dudum, the candidate who was just 53 votes behind, with 25.96 percent of the vote. Jew's belated switch from Republican to Democrat and questions about his family residence in Burlingame surely would have been significant issues in a one-on-one race against a lifelong Democrat and lifelong Sunset resident.

"I always thought if Ed and I were in a runoff, I would have had a good chance," Dudum said in a interview last week.

But under San Francisco's instant-runoff voting system, voters never had a chance to further scrutinize and choose between Jew and Dudum. Voters had been asked to rank a second and third choice. The runoff was conducted by automation, knocking out the lowest-scoring candidate on each round. Dudum led after two rounds, but lacked a majority. Jew ultimately prevailed in the fourth round.

"At least in a runoff, you win or you lose, there's no in-between," Dudum said. "With ranked-choice voting, you don't allow people to think. It's programming. It's terrible public policy."

Ed Jew went to City Hall and, within months of taking the oath of office, the FBI is shaking down his quarters at home and work in connection with a curious $40,000 cash transaction.

Jew offered rather preposterous explanations for how someone could live in a house on 28th Avenue without turning on the faucets or even giving neighbors the impression that it might be occupied.

Then there is his equally implausible contention that he just could not say "no" when the businessmen who sought his advice for permits insisted that he relay the $20,000 cash fee to a consultant he recommended -- along with $20,000 in cash for a donation to a neighborhood park group that did not know it was coming and did not receive any of it until after the FBI raid.

If Jew remains mired in denial, at some point Mayor Gavin Newsom will have to initiate official misconduct proceedings, which could lead to Jew's dismissal with a vote of eight of his 10 fellow supervisors.

In the meantime, we might need to start asking candidates to bring their utility bills when they come in for endorsement meetings.