How important is Gerrymandering?

Also (somewhat less famously) after the 2000 Census the Republican Party made no secret of their intention to redraw voting districts in Pennsylvania to get rid of Democratic Party congressional seats. They used "packing" (pack many Democratic voters into one district), "cracking" (divide the Democratic voters into several districts so they cannot win), and "kidnapping" (place two incumbent Democratic congressmen into the same district so at most one can now win). Republican leaders Tom DeLay (majority leader) and Dennis Hastert (speaker) sent a letter to the PA state legislators saying "We wish to encourage you in these efforts, as they play a crucial role in maintaining a Republican majority in the United States House of Representatives." The resulting districts then garnered such approbations as the "supine seahorse" and the "upside-down Chinese dragon." 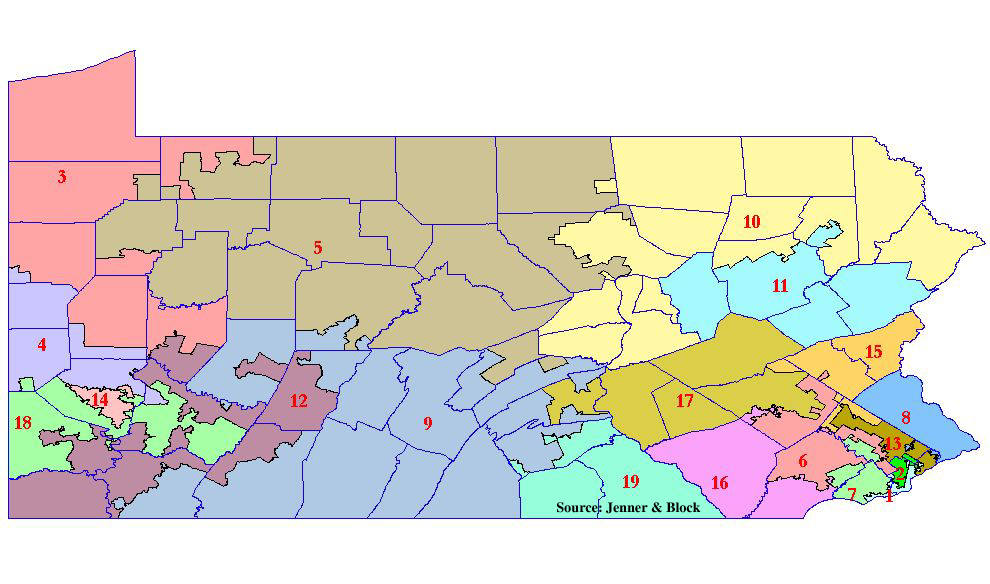 With the percent of Pennsylvanians in each party nearly unchanged, the minority (Republican) party (41% of registered voters, loser of Governor election) got 63% of the seats in Congress. Were it not for the nearly universal outcry of voters in Northeast PA and a mere 3% Democratic edge in District 17 the result would have been as predicted and planned by the Republicans – they would have gotten 74% of the seats in the 108th congress.

The Republicans maintained that the districts were very accurate according to the "one person one vote" principle. That's correct; the district populations varied by only one in 646,371 persons. While this is an amazing feat, it belies the fact that the party picked the voters and not the other way around.

[Above remarks on Pennsylvania taken from a study by the now-disbanded King's College PA Map Center and an 8 December 2003 New Yorker article by Jeffrey Toobin.]

This section extracted virtually verbatim from a news story by Taegan Goddard on politicalwire.com 29 November 2014.

After re-running the election 100 times with a randomly drawn maps, the simulated election results found Democrats winning an average of 7.6 House seats out of 13. In fact, 95% of the random redistricting simulations found Democrats winning between 6 and 9 House seats. These finds are in stark contrast with the 4 Democrats & 9 Republicans actually elected in the 2012 elections with the same vote counts. [More North Carolinians voted for Democrats than Republicans.]

WDS comments: The "random" districts were drawn by computer to obey NC laws and subjectively resembled the official districts in terms of general appearance, but were of course unbiased since based on random decisions by computer. Of 300 random maps, it turned out every one elected at least 2 more Democrats than the official map did. In other words, if those gerrymandering NC had used this computer program to generate the 300 maps then chosen the one most-benefiting Republicans, that would have been exceedingly biased of them. But still not even close to as biased as what they actually did.

Florida in 2000 was famously almost exactly even in their vote for Bush versus Gore and "should" have been even. But the district lines the Republicans drew after the 2000 census resulted in Florida sending 18 Republicans and 7 Democrats to the House.

Michigan in 2000 was won by Gore. After the Michigan gerrymandering plan was approved on 11 September 2001 (a famous date for a rather different reason... which conveniently prevented this from getting much publicity) it got 60% Republican Congressmen versus 40% Democrats (despite the Democrat candidates getting 35000 more votes) in 2002. (Previously the state had 56.3% Democratic congresmen and 43.7% Republican.)

The preceding four GOP gerrymanders (I've omitted NC, since that was not a "before versus after" comparison, but rather a "gerrymander versus random maps" comparison; but if it were included it would only strengthen our claim) had this effect:

In total – and putting in a 1σ statistical error bar: (18.5 ± 4.2)% of the congressional House seats change hands upon gerrymandering in 2000-era USA.

On the bright side, Senators and the Presidency are unaffected by gerrymandering – although recently an effort, funded by millions of out-of-state dollars provided through front organizations, was made to try to get California to apportion its electors by congressional district. This plan would gerrymander the presidency, but the referendum failed. (As of 2006 only Nebraska and Maine decide their electors in this manner.) The funding was done in such a way as to make it untraceable and evade CA funding-disclosure laws for referenda. But ultimately much of the funding was traced and found to originate from New York Republican multimillionaire (and affiliate of US-presidential-candidate-Giuliani) Howard Rich, who donated at least $2.3 million through multiple front groups such as "Americans for Limited Government (AFLG)," "Club for State Growth Action" [Rich is president, same address as AFLG], "Montanans in Action" [funded by FfD], "Colorado at its Best" [Rich is director, same address as AFLG], "Protect our Homes Coalition," and the "Fund for Democracy (FfD)" [located at Rich's address in NY]. Several other people closely connected to Giuliani also participated heavily in the effort.