Once anybody visits, a cookie is set preventing them from ever getting counted again. (Unless they refuse cookies.) Only visits to the CRV front page (and, unfortunately, this page too, but hardly anybody knows about this page and the people who do were probably already counted from the front page and hence do not get re-counted) count here. (Most non-front pages are also counted, but that's seperate.) Updates to the stats here may be delayed for up to 10 minutes. Click on picture for more information. 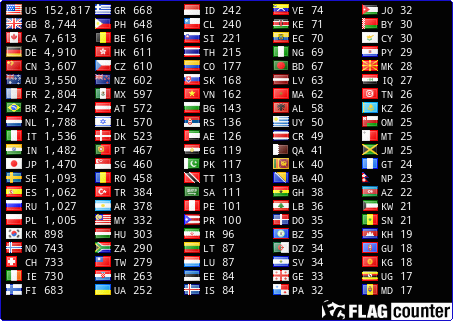 Comparisons versus other forms of education, books, marketing, etc.

The total number of distinct visitors to the rangevoting.org web site over the 5-year span starting Nov. 2009, was about 700K. If you only count those whose visit lasted at least 5 minutes, then about 130K; if you only count visits longer than 20 minutes, then somewhere between 10K and 50K (sorry, large statistical error bar on long visits).

That's been a highly successful feat of education, far greater than, say, the number of students that any conventional school-teacher has ever had, and comparable to a quite high-selling book in terms of "#copies sold." (More on that below.) However, compared to what is necessary, and in terms of our success at getting laws changed, this effort has (up to year 2014) been a failure.

As of year 2012 the average U.S. nonfiction book is selling less than 250 copies per year and less than 3000 copies over its lifetime. (Incidental quote from that article: "Achieving publishing success is 5% writing a good book and 95% marketing." Which agrees with my experience with the "spiky" nature of readership of this web site; on days with good "marketing" where there was some kind of "buzz" that day that attracted visitors, we got hugely more than the average number.) Only 6.2% of business books released in 2009 sold more than 5000 copies, according to an analysis by the Codex Group (New York Times 31 March 2010). During a 7-year span ending 2011, the average book from authors represented by the Steve Laube agency (both fiction and nonfiction, I think mostly the former) sold 20K copies. At any time as of year 2012, about 300K books are available for purchase on the market, albeit the vast majority of these are not available on your local bookstore's shelves.

So, apparently this web site during 2009-2014 was around 6× more popular than an average book from the Laube agency, 40× more popular than an average nonfiction book, and 25× more popular than the 94th percentile best selling among business books. But its popularity was tiny compared to say, The Total Woman by Marabel Morgan, the highest-selling nonfiction book of 1974, which sold 10M copies. Calling that book "nonfiction" is rather generous, though. It's a generic advice book about religion, sex, lifestyle. If you restrict attention to nonfiction books which actually contain some quality, intellectual depth, and originality, then it is hard to find out what their sales are... but... Apparently the three highest selling books Harvard University Press ever produced were Dinosaurs in a Haystack: Reflections on Natural History by Stephen Jay Gould, A Secular Age by Charles Taylor, and Capital in the Twenty-First Century by Thomas Piketty, selling respectively 60K, 60K, and about 100K copies. Those three seem to be the closest comparisons available in the book world to the present website, and indeed this website has a comparable number of readers to each of those. Thus this website is indeed reaching about the most readers it could possibly hope to reach if those three books were viewed as high water marks. However,