Instant runoff based on table 9 in this exit poll; 1633 responding voters in San Francisco (November 2005). IRV enjoyed these comprehensibility advantages versus score and approval voting:

The San Francisco study also broke up the pollees by education level ("less than HS" up to "post-grad study"), age, ethnicity, district, first language (Chinese, English, Spanish, Other), income, gender, ideology ("very liberal" to "very conservative"), whether they had voted in the preceding 2004 IRV election, etc. The French study did not do those things although in principle one could deduce their political ideology from their votes.

The overall percentage of IRV voters who "did not entirely understand" or "did not understand at all" was (12.9±0.8)%. The worst self-assessed comprehension levels were exhibited by "less than HS" education level (23.8%) and 21.9% for Chinese as 1st language. The best were post-grad education (10.0%) and Spanish as 1st language (9.0%).

Lesson: Simplicity matters. This is quite large incomprehension rate, especially for the Chinese and low-education people – most people would regard their incomprehension rates as unacceptably large. Advocates of improved voting methods need to focus on simplicity. A good case can be made that even instant runoff voting is too complicated. And now also consider the challenges faced by such countries as Afghanistan (estimated 28% literacy rate in year 2000), Egypt (estimated 72% literacy rate in year 2010 but only 63% among women) and India (estimated 74% literacy rate in year 2011 but only 65% among women) instead of the USA and France which have claimed 99% literacy for decades. Score voting is simple enough to have been used highly successfully by children in kindergarten. How many would misunderstand, say, score voting employing negative numbers as allowed scores? What about Condorcet methods or the "majority judgment"?

*Plurality voting: It also is of interest to compare with plain plurality voting. How comprehensible/incomprehensible is that? Here's a January 2009 telephone poll of 1485 USA citizens aged≥18 asking about their experiences voting.

For whatever it is worth, this indicates score voting is actually slightly more-comprehended than present USA ballots!

We warn the reader that all three of these polls were in different contexts, different places, different survey methodologies, and with slightly different wordings, so attempts to compare them directly at high accuracy may be dangerous. (We're doing that anyway since we don't have any choice.) 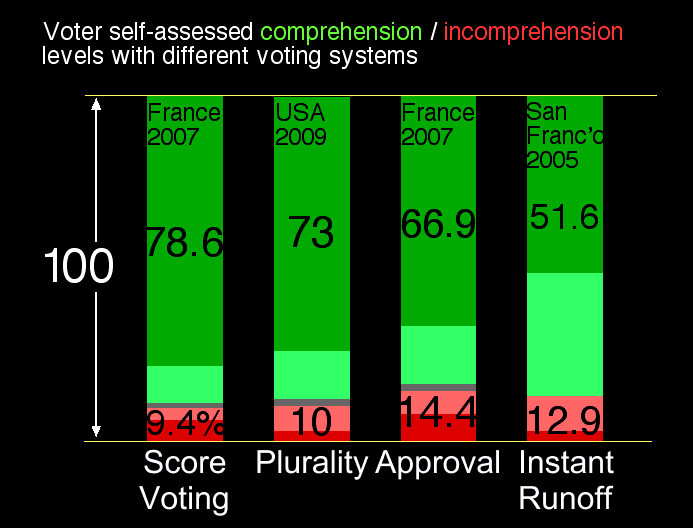 In order of decreasing self-assessed comprehensibility :