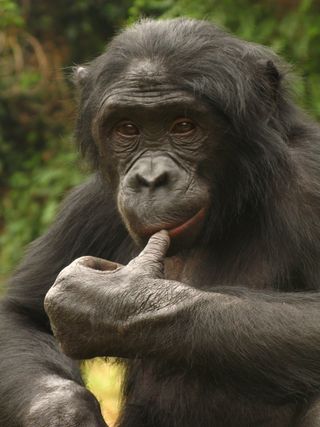 How do bonobos feel about their food? To find out, just listen to what they say when presented with a desirable or disgusting morsel, suggests a new study.

Bonobos yell out their food ratings using at least five distinct vocalizations, the study found. Since the calls are tonally similar to certain other primate sounds, such as the human exclamations "Yum!" and "Ewww," the scientists think there might be a somewhat universal primate language when it comes to food.

"It's an interesting possibility, which seems to be true for apes and humans," co-author Klaus Züberbuhler told Discovery News, explaining that both groups can "modify the acoustic structure of their calls, and so reflect the quality of the food they've encountered."

Züberbuhler, a professor in the School of Psychology at the University of St. Andrews in Scotland, and colleague Zanna Clay began their experiments by documenting the food preferences of bonobos housed at the San Diego Zoo and the San Diego Wild Animal Park. The great apes were presented with foods on a tray, and the scientists noted their first choices.

Figs got a perfect score, with raisins a close second. In order from most to least favored, the rest of the list read: grapes, bananas, popcorn, apples, oranges, biscuits, celery, melon, lettuce, yams and peppers.

"It appears that energy-rich succulent fruits were the most favored of foods," Clay told Discovery News. "A bit like us, they weren't so keen on their vegetables."

The scientists then recorded the bonobos' vocalizations as they interacted with each type of food. Specialized software identified the precise structure of the calls.

The researchers concluded that bonobos produce five distinct types of calls in response to food: barks, peeps, peep-yelps, yelps and grunts. These are documented in a paper accepted for publication in the journal Animal Behavior.

"Bonobo vocalizations are surprisingly high-pitched, and their food calls sound more like the shrill calls of young children or birds rather than from a large ape," said Clay.

Thanks to Tom Smith for pointing out this article.