by Michel Balinski and Rida Laraki. Translated into English by Warren D. Smith 16 April 2007. You can also see the French-language original of this web page at the Ecole Polytechnique entitled "Le jugement majoritaire" and our critique, and our annotated table of their results.

This page gives theoretical and experimental documentation of a new kind of poll: "the majority judgement." It will be tried out on 22 April 2007 in three polling stations in the town of Orsay (91 - the Essonne). The experimental results will be posted as soon as possible.

In this kind of poll, each voter must fill the following ballot paper, by providing a score for each candidate. There are 6 possible scores ranging from "very good" to "reject." 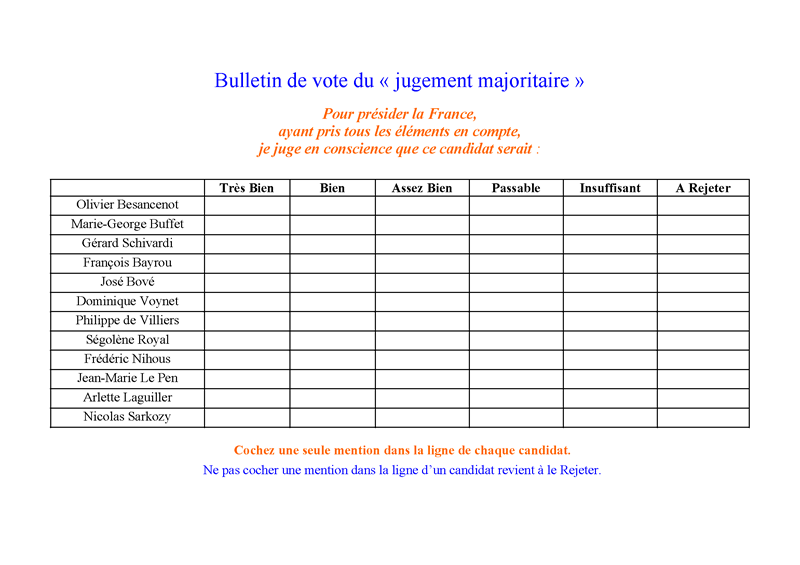 How does it work?

One sorts all the scores obtained by this candidate, by laying them out from best to worst, then one takes the score which is in the middle of this classification, i.e. we assign a candidate his median score.

Let us imagine that there are only 5 voters and that a candidate obtained the scores:

This candidate's "majority score" is the median, i.e. "mildly good." It is the best score in the sense that the majority of the voters agrees that the candidate deserves at least the score "mildly good."

But an electoral method must consider all possible cases. If there are an even number of voters: after having sorted the scores from best to worst there will be two scores which are in the middle ("bi-medians"). If they differ, the method chooses the worst of these two scores.

What if the election is a tie?

Example: There are 7 voters and two candidates.

One starts by sorting the scores of each candidate.

For the candidate A, that gives:

The "majority score" (median) for both candidates is "Mildly Good" – a tie. To decide between them one removes one "Mildly Good" from each to get

Thus the "majority score of rank one" of A is Passable, while that of B is Insufficient, therefore A is elected.

(We thank Jerome Renault for this simple and clear description of the majority judgement).

Question: Isn't it possible in this process to run out of ballots on which one or more tied candidate is given the median-score? What happens then?
Answer: It is (almost) impossible. If you run out, that means the median changed. You now just continue on using the new median. Always use the current median. So you never run out until either the tie is broken or you really run out (in which case the tie is never broken) but that'll be extremely rare.

Links (All of these are in French, except for the ones saying "ENGLISH")