This is a list of 322 "Great Inventions" compiled by the 2003 Encyclopædia Britannica Almanac. Our contribution was to color each invention red if it happened in 1800 or later in (what was at the time) a non-democracy. Of these, only 60 occurred before 1800, the rest, (262) after. [You can also see the next section about an independently compiled list of 100 inventions.]

Of the 262 great inventions after 1800, all but 30, i.e. 88.5%, occurred in ostensible democracies, despite the fact that a majority of the world's population during this period lived in non-democracies. It appears that important inventions occur about 10× faster in democracies. 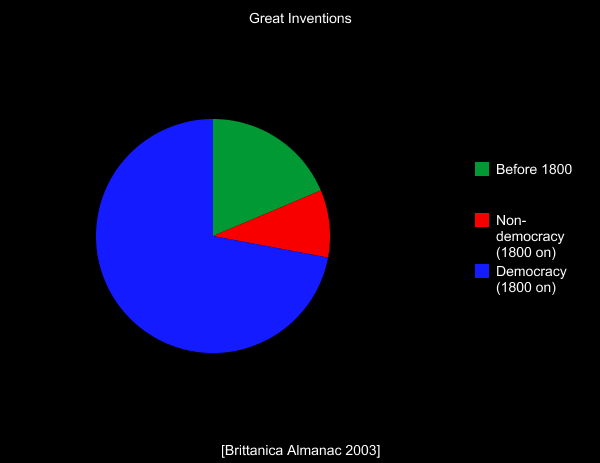 I also found the book Inventing the 20th century, 100 inventions that shaped the world by Stephen Van Dulken (NYU Press 2000). It discusses 100 inventions. According to Dulken, all were invented in the USA, UK, and Canada except for these 17:

And of these 17, only the 5-and-one-sixth with red font were invented in countries considered at the time to be undemocratic. One can quibble over the precise meaning of "democratic," but anyhow, according to this reckoning, 94.8% of the best inventions of the 20th century were invented in democracies despite less than 50% of the world's population living in them. Again, this is compatible with over 10× greater invention rate in democracies.